Ketamine Usage in Hong Kong: A history of drug abuse

Despite its creation in the 1960s and widespread use as a recreational drug in the US drug scene in the 1970s and 1980s, Ketamine (Chinese: 氯胺酮, Lǜ'āntóng, or K他命) didn’t become a popular street drug in Hong Kong until 2000.

But despite its slow entry into the Hong Kong club scene, ketamine quickly surpassed other drugs in use and abuse.

Today, authorities are cracking down on ketamine use. The attitude towards drugs and addiction is still behind the quickly developing harm reduction views of the West. Confusing ads in the street warn the public to “just say no” to using drugs. Information about help and treatment is more difficult to find, although there are substance abuse centers and Twelve Steps groups.

It’s no surprise that the therapeutic use of ketamine for treatment-resistant depression and other mental health concerns is not in practice in Hong Kong.

The history of Ketamine in Hong Kong

After decades of British and Japanese occupation, Hong Kong was transferred over to Chinese control in 1997. Until recent years, Hong Kong operated under a "one country, two systems” principle. Hong Kong was considered a part of China yet could maintain separate governing and economic systems. Hong Kong has a capitalist economy with free trade and low taxation.

As a result of its history, Hong Kong enjoys a mix of English and Chinese influences. British influences on the economy, education, and nightlife mix with Chinese values of family, forming a distinct sense of Hong Kong identity.

As a small island, it is also one of the most densely populated places in the world. And although it is considered “the world’s richest city,” with more multi-millionaires than New York, there is also severe income inequality.

Ketamine Use in Hong Kong

Ketamine reportedly entered the Hong Kong club and drug scene in 2000. The number of ketamine users rose from 1605 in 2000 to 5280 in 2009, as the drug gained popularity. Initially, ketamine was considered a poor substitute for cocaine. As time went on, ketamine became the most widely abused drug in Hong Kong from 2006 to 2015 (see figure), quickly overtaking heroin as the drug of choice. 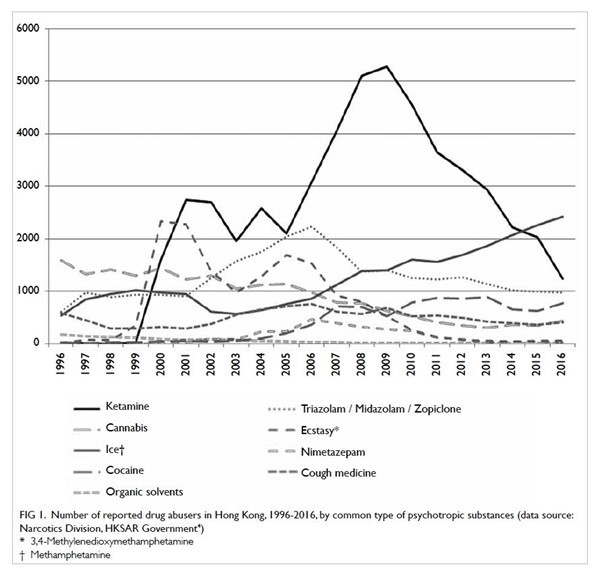 The first case of ketamine-induced urinary cystitis was published in 2007. As urological complications became more widely known and the police began cracking down harder on ketamine use and other drugs, use began to decline. Changes in the club scene and the movement of drug use from the clubs to indoor also played a significant role in the shifting popularity of ketamine.

Nightclubs opened up in the 1970s in or around hotels in Hong Kong, playing disco music and showcasing live bands. Drugs were common in the younger crowd along with the older, working-class residents.

Kowloon was the heart of Hong Kong nightlife in the 70s, centered around English-style places. International models, designers, and other celebrities would show up at clubs like Chesa or Gaddis and interact with locals. In the late 70s, House Causeway Bay and Disco Disco opened up Lan Kwai Fong, influencing the scene further.

In the 2000s, the international rave scene came to Hong Kong. Drugs, music, and lollipops filled the clubs.

Today, the club scene seems to have a broader audience: younger, with a more modest income.

One thing is in common with the club scene then and now: you could and still can find ketamine in clubs across Hong Kong, along with other popular club drugs such as Ecstasy or MDMA and 麻果, a type of meth in pill form, despite police attempts to crackdown.

Ketamine Legality and Restrictions in Hong Kong and China

Ketamine is legal for medical reasons. Like in many other places worldwide, it is used as an anesthetic in hospitals, veterinary clinics, and other medical facilities.

The Chinese government is trying to set up further international restrictions on ketamine as a possible attempt to control ketamine manufacturing and use inside China. If it succeeds, the result could be a severe deprivation of ketamine in developing countries, where it is essential for medical and veterinary use.

At the same time, labs for synthetic drugs open up throughout China. China is set to become the most prominent drug trader while keeping its strict anti-drug laws.

Jails in Asia have the highest proportion of women, most of them jailed for drug trafficking. As Hong Kong is a central transit hub that enforces strict controls, many of the arrests are made there. And the attitude towards women who are used as drug mules is not forgiving: Hong Kong is not inclined to reduce punishments for these reasons and instead chooses to set the terms according to drug type, amount, and purpose.

Ketamine is still very popular as a recreational drug in Hong Kong. Compared to other narcotics, the price is low (reported in 2009 as one gram for $13 compared to cocaine’s $103).

A 2019 report shows that ketamine abuse has decreased by 88% in Hong Kong since 2007, while the use of cocaine and amphetamines has increased. It does appear that drug use has moved from clubs to homes, with most users choosing to partake in drugs at their house or a friend’s house.

Further studies confirm this trend. Tam et al. (2018) interviewed 30 ex-drug addicts in Hong Kong and found that most of them started taking drugs in their youth as a social activity but progressed to social isolation and private use.

Street ketamine in Hong Kong is smuggled from mainland China and India. Drug abuse amongst teenagers is quite common, with a privately-run school called Christian Zheng Sheng College set up to help reform young drug offenders, where students stay for an average of three years.

While ketamine is legal for medical use in Hong Kong, the use is restricted to physical ailments.

As ketamine infusion centers pop up around Europe and North America, Asia is slow to catch up.

There are no official ketamine infusion treatment centers for people struggling with issues such as depression and anxiety anywhere in Hong Kong, China, or indeed anywhere in Asia.

Due to the prevalent negative attitudes in China and Hong Kong on drug use and addiction, it is unlikely that one would be looked upon favorably for using ketamine for therapeutic purposes.

While ketamine remained the main drug of choice in Hong Kong for many years due to its low price and pleasant effects, ketamine use in Hong Kong seems to be on the decline. Punishments can be long and unforgiving, and the general attitude in the public looks down on drug use and addiction.

The road to clinics offering mental health care in the form of ketamine infusions appears to be quite long to travel still. The apparent lack of willingness to consider ketamine as a valid treatment option is unfortunate due to the number of people who credit this type of treatment with their life.

Understanding the Off-Label Use of Ketamine
The Effects of Ketamine on Human Sexual Behavior
What Is a K-Hole? A Full Guide to K-Holing
Risks and Side Effects of “Street” Ketamine
Nasal Spray Vs. Infusion Ketamine: Which is Better?
The History of Ketamine: From Party Drug to Wise Healer
FacebookTwitterRedditWhatsApp